“I know that life can be viewed from more than one perspective.”

#mtopstorytelling tells the stories of our MTOP associates, who are highly skilled refugees mostly from Syria, Iran, Irak and Afghanistan.
Be inspired by our MTOP stories!

My name is Majd Bashour. I was born in 1974 in Syria, lived in Damascus and grew up in a family that was guided by the light of truth and believed in love as a message, in science and culture as a method and in charity and goodness as a path. 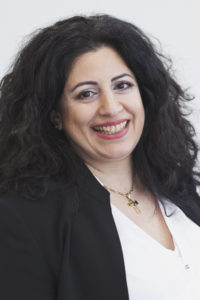 I have a postgraduate diploma and a BA in Romance Languages and Literatur with focus on French from the University of Damascus, and I also speak English. I have a Fine Arts Certificate and I am a member of the Syndicate of Fine Arts in Syria and have participated in several art exhibitions.

“I was the first female leader in one of the biggest

In Syria I worked for 15 years in one of the two largest telecommunications companies “Syriatel”. During that time, I’ve done a lot of management duties, mainly in the areas of customer service and human resources, and I can say that I was the first female leader in the company. I am married to the engineer Joseph Almaari, who worked in the Ministry of Culture in Syria and now he is an employee of Caritas. I have three children Mira is 11 years old, Raji and Lucia 4 years old.

Fate wanted to play its game where after living in Austria for a month in 2015, we discovered that my mother has cancer and that she will die in a short time. It was a tough experience, but it showed me the humanity and compassion of Austrian people.
The twins were too small, eight months only to understand. Our eldest daughter, who was about eight, needed to start school, and I needed to help her learn the new language. So I started studying German with and for our daughter. I was invited to attend the parents’ meeting at the school. My sister, who had already lived in Austria for 19 years helped us a lot and came to the first meeting with me. I went to the second meeting alone, which was embarrassing. I did not understand a word, but because I believe in the following saying “A river cuts through a rock, not because of its power, but because of ist persitense” I could, in a year, that I can learn the language in a way that allowed me to interact with other people in a year.
Now, I am the parents representative for two consecutive years and I help with many school activities. We tried as a family to continue our lives and activities as we did in Syria, where for example we registered our daughter in a choir and clubs. Recently our daughter played a lead role in a musical and I helped with the stage set , it was a great experience.
The biggest challenge for me now is to find a job that will help me to build a new life and to contribute to my new home country.

The experience of war and the step to start a new life from scratch gave me a deeper and a new perspective on the meaning of life.

“Of course, life does not change, it’s our point of view that is changing.”

I know that life can be viewed from more than one perspective, and that the way we look at it varies from a person to another, and this is due to various factors, such as personal experience, culture, consciousness, etc. So that does not mean that others are wrong and that my point of view is correct. If we understand this fact, we can build bridges between the differences and discover new perspectives.
Share
previous post

Register for the newsletter!